It’s almost Halloween! I love this time of year, and spend weeks getting into the spirit (mostly by watching a lot of scary movies, but also with decorations and other spooky activities). There are lots of fun ways to celebrate Halloween, and here are a few of my personal favorites (both old and new): 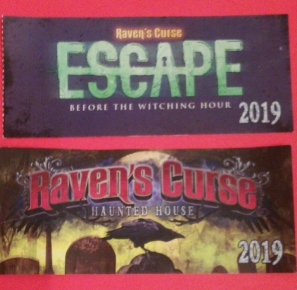 A few weeks ago, I posted a preview of my upcoming activities, and last night I checked one off by going to a haunted house. I was pretty nervous about this, because I haven’t had great experiences in the past, but it was a lot more fun than I expected. Even though there are lots of haunted houses in the St. Louis area, we chose to take a 90 minute drive to a place in Illinois called Raven’s Curse, because we’d heard great things about it. Also, they have a Halloween themed escape room, and we couldn’t pass that up.

We were a little bummed that we weren’t able to go through the haunted maze, which was closed because of heavy rain (it’s an outdoor attraction), but we did the escape room and went through the indoor haunted house, which is, of course, the main event. While I didn’t love the jump scares, the overall experience was well worth it. I was especially impressed with the quality of the makeup and the electronics, which included lots of automated monsters and some really awesome video effects, which were set up on screens that were designed to look like windows into other parts of the building.

I didn’t get any pictures, because they aren’t allowed inside, and the rain kept the actors from roaming around outside like they normally would. If you want an idea, though, here’s the promo video for the attraction:

Much to my surprise, I had a great time and will probably head back next year for the haunted maze.

Movie Pick: The Cabin the the Woods 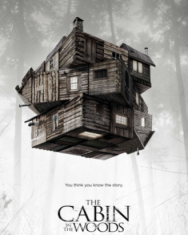 The Cabin in the Woods offers a satirical look at horror tropes while still taking itself completely seriously and providing genuine tension for the characters and the audience. The main plot is deliberately cliche-riddled in the best possible way, and the underlying subplot (which I won’t discuss because of my no spoiler policy) adds a whole new dimension. Despite skirting the edges of parody, it’s definitely a horror movie, and one of the most creative, original, and engaging examples of the genre I’ve ever seen. This is a movie I’ve watched again and again, and enjoyed every single time. 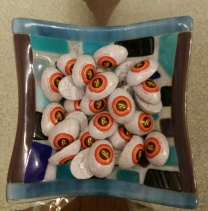 Reese’s Peanut Butter Cups are hands down my favorite candy, and they have so many cute Halloween options! Any candy is likely to make trick or treaters happy, of course, but I love going the extra mile and giving out treats with the holiday theme. Monster Mania miniatures are available at Target, and the wrappers are just adorable. Other options include bats, ghosts (for white chocolate lovers), pumpkins, and eyeballs, which I’m pretty sure are new this year. The latter have been filling my special candy dish (click here for my post on making the dish) for the last couple of weeks, and they’ve been quite a hit.

I definitely stayed up past my bedtime last night, so over to you. What are your Halloween favorites?