I’m super excited about the 2020 bakeoff, which officially takes place this weekend. Melody will be posting all the entries on her Caramel blog on Saturday and Sunday, and it’s a lot of fun to see all the great pictures and read everyone’s baking stories, and Melody does an amazing job hosting the event.

Last year, I decided to take a major risk and try something I’d never made before: a complicated chocolate mousse layer cake, topped with a chocolate shell. The results were…less than aesthetically pleasing:

Despite the visual fail, the experience was one of my highlights of last year, and the resulting post remains one of my all time favorites (you can find that post here). If you haven’t read that post, I hope you do.

The original plan for this year was to team up with my sister Amy and, once again, try something new, difficult, and fraught with danger. But 2020 is the year of plans going awry, and I ultimately ended up facing the challenge on my own, and unable to find some of the ingredients I would have needed for the grand vision. Amy and I are keeping that plan in our back pocket for next year.

So, since I still wanted to try something new, I decided it was high time I learned to make cheesecake. I chose a straightforward mini cheesecake recipe (you can find it here), turned on my “You Can Do It” playlist, and got to work.

Step One: Set Up

One note about ingredients and prep: I faced an unexpected snag with the mini muffin cups. I’ve been having my groceries delivered since the start of the pandemic, and while I’m sure the stores have this item, I wasn’t able to order it online (I couldn’t get full sized either). So I ended up ordering them from Amazon, which delayed my baking for a couple of days.

Anyway, this recipe didn’t call for a lot of ingredients, so everything else was either something I already had or something that was easy to obtain. I assembled everything I would need and mentally planned all the steps and the timing, because planning is what I do.

Cream cheese, sugar, vanilla, egg. Again, easy. I had a little bit of trouble filling the cups without making an unholy mess, but I made it. 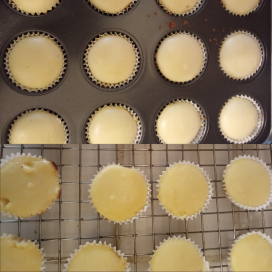 Twelve minutes in the oven, ten minutes in the pan, then…about an hour on the rack, I think. I got a little distracted while waiting for them to cool (I had a new book), so I’m not entirely sure how much time passed. When I remembered to check, they were ready to chill in the fridge.

So far, I was feeling pretty good about this project. It’s funny, though…I was almost disappointed with how easy things had been going. After the huge challenge of last year’s entry, I began to wonder if I had sold myself a little short. This wasn’t shaping up to be an interesting story…but on the other hand, there’s something to be said for having food that actually looks worth eating. 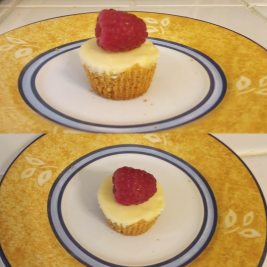 Positive outcome one: my baby cheesecakes looked like the picture in the recipe, and a picture on my graham cracker crumbs box. Positive outcome two: they tasted right. Yay!

That meant it was time to put on the finishing touches. The recipe called for putting a raspberry on top, so I did. Looked good. Tasted good. Victory.

Except…now I was bored. It had been too easy. I had almost two dozen little cheesecakes, and all I was going to do was slap a raspberry on top of them all and call it good?

As my father would say, that is not the Cade way. Time to place another grocery order.

So let me say this: When the question is, “Which of these three toppings should I try to make?” the answer probably shouldn’t be “Yes!” And now you all know how I spent the rest of the evening…

I ended up with a kind of Goldilocks situation. The chocolate came out a little too thick, the strawberry came out way too thin, and the caramel was close enough to just right.

And finally, continuing the tradition of “It may not be pretty, but it tastes good”, my masterpiece:

Has anyone else tried something new lately? Tell me about it in the comments!