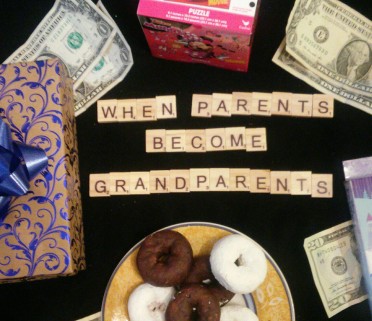 Let me preface this by saying that I could not have been blessed with better parents. They always have been, and continue to be, loving, honest, supportive people who are my very best role models. I had a wonderful childhood, and would have to struggle to find anything to criticize about the way they raised us. I should also mention that since they’re retired now, they have a lot more free time.

Disclaimers aside, now it’s time to poke fun at them. You see, almost ten years ago my parents became grandparents, and now they say and do things that occasionally make me suspect that maybe, just maybe, these aren’t the same people I grew up with.

Here are some examples:

“I have everyone’s favorite.” 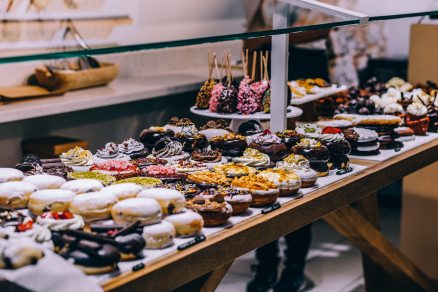 Dessert was never a common thing in my parents’ house. It was for special occasions, and if it was your special occasion, then you got your favorite, naturally. However, there was one dessert, and that’s what you ate, and you were thankful to have it. Granted, our family is larger now, so we probably need two (or one jumbo size), but we never need four desserts.

Four. At every family dinner. Because we need to make sure everyone has something they love. I mean, that’s also good for me (hooray for chocolate), but this is certainly a change from the parents I used to know. Speaking of dessert…

If there’s four options, and one of the girls wants all four, what’s the harm? There’s nothing wrong with one more cookie. Let’s have donuts on Christmas morning. Or just because it’s Saturday.

Keep in mind, these are the same people who restricted our weekly soft drink intake. Suspicious behavior indeed.

Don’t get me wrong, my parents were big on spending time with us. We had dinner together every night, played games, had constant conversations, went out to eat once a week…Mom and Dad always had room for family time.

Going out for activities, however, was neither constant nor spur of the moment. These kinds of things were planned, scheduled, budgeted, and long anticipated. I can count on the fingers of one hand the number of times my parents planned an outing with less than 72 hours notice (and 72 hours was a pretty short timeframe).

My nieces’ grandparents, however, do this all the time. Forget schedules and planning-let’s go to the Magic House! The people who taught me the importance of scheduling (and introduced me to the joys of to do lists and calendars) are suddenly whimsical and capricious. My Spider-Sense is tingling.

“I saw this and just had to buy it for you.” 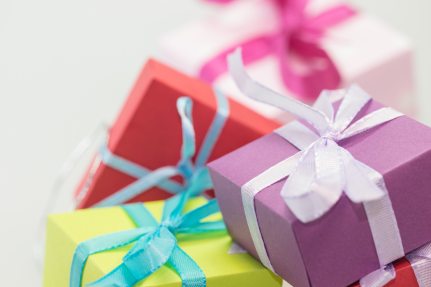 You know what else my parents taught us to do? Save! Budget! They took care of everything we needed, and were generous to a point, but only to a point. Beyond that, if it wasn’t Christmas or your birthday, then you knew how to get the things you wanted: use your own money. For larger purchases, they would pay half if we saved the other half (which I totally support, because it really helped us learn about priorities and responsibility), but other than that we had our allowances, and then we had jobs, and that was that.

So who are these people who are randomly buying presents all the time? On a related note…

“Here, have some money.”

There have been no chores, and it is not a special occasion, but I have some cash so I’m just going to give it to you?! *What is happening?!*

Once upon a time, in the not so distant past, my father would have insisted that tardiness was the eighth Deadly Sin.

These days, as long as the grandkids arrive at some point, it doesn’t matter if the rest of the family has spent twenty minutes watching dinner get cold. And don’t think my sister doesn’t take full advantage of this.

“Be sure to let the kids win.”

You know what else my father used to be? Competitive. Super competitive. He refused to let us win at Candyland. He formed coalitions in Monopoly, and then ruthlessly turned on his former partners. He stayed up late trying to learn to beat us at video games. He could handle losing, but only after fighting to the death.

So it probably won’t surprise you to hear that his daughters grew up to be much the same. Now, however, we all have to lose. All the time. No exceptions.

“Go ahead and eat that in the car. It’s ok if you spill.”

I can’t even talk about this one. 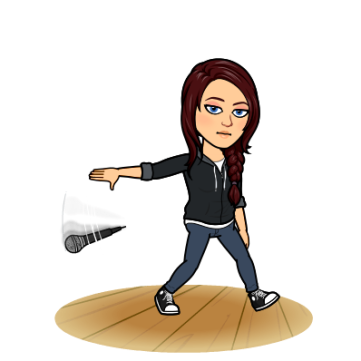 How widespread is the pod people invasion? Anyone in your life acting suspicious? Let’s compare notes!

21 thoughts on “Worth Mentioning: My Parents Might Be Pod People”