I’m sure that those of you who read my February in Review post are completely unsurprised by the subject of this week’s blog, given that I highlighted Captain Marvel as something I was really looking forward to this month.

As I’ve mentioned before, I love superheroes. I was one of those kids who got hooked on comic books and never gave them up, so every time a beloved character is brought to life on the big (or small) screen, I get the chance to go into a geektastic frenzy. (And when a new offering totally misses the mark, I just pretend it never happened.)

Anyway, I was super stoked for Captain Marvel, and wholeheartedly recommend it to you. Here are a few main (spoiler free) reasons it’s worth watching.

As I said, I don’t do spoilers, but it’s really hard to talk about the plot of this film without them, so I’ll just say that it worked. It was solid, interesting, and mostly well paced. I have a few quibbles, but I almost always do, and they’re pretty minor things. The script and storyline are really good, and I was engrossed from start to finish. 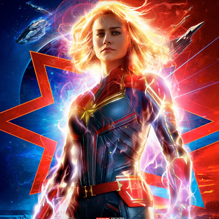 Carol Danvers, brought to life by Brie Larson, is one of my favorite heroes to come out of the Marvel Cinematic Universe so far, and that’s really saying something. She definitely is my favorite heroine. Carol is portrayed as strong, cool in the “collected” sense of the word, and as full of jokes and quips as any other Marvel character. She’s often facing overwhelming odds, but she does it with a smile on her face. The script, and the performance, create a fully realized character that you want to cheer for.

There’s been a lot of talk about Marvel’s first female headliner, so let me address that for a minute. The movie doesn’t ignore the fact that Carol is a woman, or treat her just like it would a male character, but the movie isn’t about that, and I’m glad. She’s the kind of heroine I’ve been looking for from Marvel for some time. She doesn’t have Black Widow’s “Broken Bird” archetype, where the badass heroine has a dark and tortured past. She doesn’t have the uncertainty and indecisiveness of the Scarlet Witch. She definitely isn’t playing second fiddle to another character. She’s a woman, she’s a hero, she’s awesome…enough said.

The movie looks great. It retains the overall “Marvel” aesthetic, but it adds some really unique twists. Carol’s superpower is stunning. The designs of the alien vessels are wonderfully original, while still fitting into the visual stylings of previous films. Special effects, costume designs, set dressing…everything in the movie shows a careful attention to detail that makes the film totally immersive.

I mentioned in my Bumblebee review that I enjoyed the authentic 1980s feel, and Captain Marvel did the same for the 1990s. The details, from the cars on the road to the presence of a Blockbuster Video (which was, once upon a time, the place where I started every weekend), the film perfectly matches the time period without distracting from the storyline, and the soundtrack was absolutely perfect. If you ever look back at the 90s with a sense of nostalgia (come on, I can’t be the only one), you’re in for a real treat.

As amazing as Brie Larson was, no one can carry a superhero movie on their own. The standout supporting characters were, of course, Samuel L Jackson as Nick Fury (using de-aging technology that actually looked good for once) and Lashana Lynch as Carol’s best friend Maria Rambeu. They both gave amazing performances, and the on screen interactions felt completely natural and believable.

20 thoughts on “Worth Watching: Captain Marvel”