The ability to access work resources remotely has greatly increased over the course of my professional life, and it can be a mixed blessing. Sometimes (not often, but occasionally) I regret being so plugged in, as it can allow work issues to intrude in situations where I’d prefer they stay more distant. Generally, though, I like staying connected, and today I’m supremely glad for those resources, because the weather outside is frightful.

We’re in the middle of a winter storm that’s been coming through in waves. All the schools are closed, the Missouri Department of Transportation is recommending delaying or avoiding the morning commute, and I’m spending the day working from the comfort and safety of my living room. Here’s what’s been going on: 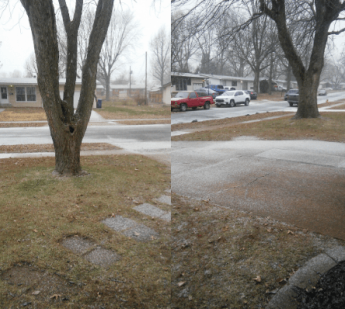 The snow started around 9:00, and by 10:00 there was just a light dusting. However, it began to pick up shortly after I took the photos above.

By 11:00, the snow was definitely noticeable, but we were just getting started. The forecast called for heavy snowfall in the afternoon/evening, with the heaviest accumulation predicted at a rate of an inch per hour.

By 3:00, we had a lot of snow on the ground, but the heaviest period was behind us. For Sunday, anyway.

The snow stopped in the early evening, and the plows were out, but we were warned that it wasn’t over. The forecast called for freezing rain overnight, and more snow starting late morning and continuing into the evening. By this point, hundreds of schools and businesses had announced that they would be closed on Monday, and many people had decided, or been instructed, to work from home (I was very glad that my organization was one that made the choice not to have us come in today).

I woke up early (as usual), and learned that while a lot of progress was made in clearing the roads, people were still being urged to stay home if possible, especially since there’s more snow on the way.

Updated forecast predicts an additional 2-5 inches of snow before the storm moves out of the area around midnight. It will be interesting to see exactly when things taper off, and whether the plows are able to clear things up by morning.

How’s the weather in your neck of the woods?